Pokémon is back and now the elusive Pikachu can bring customers right to your door.

Have you seen kids and adults exhibiting a new smartphone behavior recently? They walk a ways, stop, hurriedly tap their smartphones and walk on. Chances are they’re hooked on the revival of an old craze that is really taking off in the form of a mobile app called Pokémon GO. Maybe you’re one of those people. If not, the weekend’s almost here, and the game beckons. 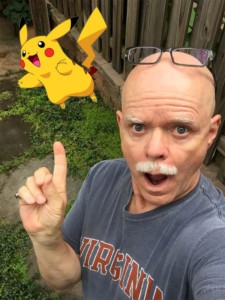 According to Vox, “Pokémon Go is an inescapable force of nature. Building on the giant video game franchise created in the ’90s … Pokémon Go

[takes] advantage of our nation’s ADD nature, our reliance on smartphones, the warm fuzziness of nostalgia, and our human thirst for escapism.” Sums it up.

The game is getting people away from TV and computer screens and back outside. People are accidentally getting exercise – and sore from it – #pokemonlegs is a thing.

There are also reports that Pokémon GO is getting kids with autism and learning disabilities outside and into socializing. That it is helping veterans with PTSD. An animal shelter is using the game to bring in people by the droves who are then asked to take adoptable dogs out for a walk. Churches are introducing their services to potential new parishioners when they stop by to capture Pokémon.

As with anything, there are downsides to the game … inattentive players have fallen off of cliffs and gotten into car accidents while chasing these adorable cartoons around. Yikes. Capturing Pokémon can be a data suck, too.

Ok, so what about the business marketing potential?
That’s solid. If you have a brick-and-mortar store and want more traffic, start Pokémon-ing. Some top candidate stores are ice cream shops, restaurants, bars, cafés and movie theaters.

Business owners who are near or on top of a “Pokéstop” or “Gym” (where teams face off against each other) can drop “lures” that bring humans (“Trainers”) to your location. If you’re not near a Pokéstop or a Gym at the moment, never fear. As you might expect, sponsored locations are on the way.

Inc. says, “The speed at which Pokemon Go has spread is unprecedented. Less than a week after launch, this augmented reality mobile exploration game has been installed on twice as many phones as Tinder, it has double the engagement of Snapchat, and it is eclipsing Twitter in its percentage of daily active users.”

“Smart businesses have caught on too. As Pokemon Go users traverse their towns in search of Pokemon, local stores, restaurants, movie theaters, and other businesses are capitalizing on this massive opportunity, driving huge amounts of foot traffic and conversions both with simple in-app purchases and creative marketing campaigns.”

For more, read Inc.’s post, “Pokemon Go Is Driving Insane Amounts of Sales at Small Local Businesses. Here’s How It Works. For $1.19 an hour, you can have more customers than you’ve ever seen in your life.”

And Forbes’ post about using the game to build business.

Before jumping in, do take a look online for articles about safety and the info you may be sharing with the app developer. It appears that the latter is in line with other apps after a stumble on their rollout in which they did request access to too much info on your phone.

And last, here’s a terrific video from the Miami Police Department that acts as a primer on how the game works and teaches some safety lessons as well.

I guess it’s time to get on board … see you out there!